Practice Italian reading and listening with the Italian experiment

Now, in this post, I collected 3 videos about the Italian experiment of Galileo Galilei to practice listening and reading (if you need subtitles).

Do you know this famous Italian scientist? Keep reading to discover his fascinating story!

“Philosophy is written in this grand book the universe,” Galileo said.

“But the book cannot be understood unless one first learns to comprehend the language and to read the alphabet in which it is composed. It is written in the language of mathematics, and its characters are triangles, circles, and other geometric figures, without which it is humanly impossible to understand a single word of it.”

By the way, did you know that there’s a free collection of short stories and news with slow audio? It’s perfect for beginners!

Galileo Galilei (1564-1642), was one of the most distinguished of the early scientists. He was a professor of mathematics at Pisa in Italy, but he was also a great experimental physicist.

He made major contributions to math, physics, and astronomy during the Scientific Revolution of the 16th and 17th Century

He improved the telescope, used it to study the moon, and discovered four of the moons which go around Jupiter.

The so-called “father of modern science,” his work on proving the heliocentric model of the galaxy brought him into conflict with the Catholic church.

The drama of Galileo’s trial by the Inquisition in 1633 has cast him as a renegade astronomer who scoffed at the Bible and drew fire from a Church blind to reason.

Indeed, the myth of the martyred Galileo perfectly symbolizes the current division between science and faith.

But the real Galileo, never tortured or excommunicated, remained a loyal Catholic throughout his life.

To practice listening, here’s a short introduction in Italian by the prestigious publisher Treccani.

The language used it a bit technical but the animation makes it enjoyable.

When Galileo was young, one of his contemporaries used these words to describe Aristotle’s idea of how objects fall:

There is a natural place for everything to seek, as “heavy things go downward, fire upward, and rivers to the sea”.

Galileo took an interest in rates of fall when he was about 26 years old and a math teacher at the University of Pisa, where he allegedly conducted the Italian experiment. It seemed to him that — with no air resistance — a body should fall at a speed proportional to its density. He decided to test this modified Aristotelian view by making an experiment.

The law of falling bodies is one of Galileo’s key contributions to physics. It states that objects fall at the same speed regardless of weight or shape. Through his experiments, Galileo countered the pervasive Aristotelian view, which held that heavier objects fall faster than lighter objects. The distance an object travels, he calculated, is proportional to the square of the time it takes the object to reach the ground.

Earlier philosophers, beginning with Aristotle, had concerned themselves with pinning down the causes of motion. Galileo dropped all Aristotelian talk of why things moved and focused instead on the how through painstaking observations and measurements.

Instead of “essences” and “natural places,” Galileo sought quantifiable entities such as time, distance, and acceleration to describe the way everyday objects move, bend, break, and fall. His emphasis on the practical application and value of science set him apart from most philosophers of his time.

Before conducting the Italian experiment in practice, Galileo found a theoretical basis for it.

Galileo set out his ideas about falling bodies, and about projectiles in general, in his book Two New Sciences.

The two were the science of motion, which became the foundation-stone of physics, and the science of materials and construction, an important contribution to engineering.

Galileo arrived at his hypothesis by a famous thought experiment outlined in his book On Motion.

This experiment runs as follows: Imagine two objects, one light and one heavier than the other one, are connected to each other by a string. Drop this system of objects from the top of a tower.

But the system considered as a whole is heavier than the heavy object alone, and therefore should fall faster. This contradiction leads one to conclude the assumption is false.

Did the Italian experiment really happen?

Between 1589–92, the Italian scientist Galileo Galilei (then professor of mathematics at the University of Pisa) is said to have dropped two spheres of different masses from the Leaning Tower of Pisa to demonstrate that their time of descent was independent of their mass, according to a biography by Galileo’s pupil Vincenzo Viviani, composed in 1654 and published in 1717.

According to the story, Galileo discovered through this experiment that the objects fell with the same acceleration, proving his prediction true, while at the same time disproving Aristotle’s theory of gravity (which states that objects fall at speed proportional to their mass).

While this story has been retold in popular accounts, there is no account by Galileo himself of such an experiment, and it is accepted by most historians that it was a thought experiment which did not actually take place.

Here’s a famous documentary in Italian (“Superquark”, with Piero Angela). I checked the automatic subtitles and they’re accurate, just in case.

Since this is a TV program, the language should still be accessible to intermediate speakers, also because scientific terms are very similar between Italian and English.

An interesting detail in the Italian experiment

One result of the experiment surprised Galileo, and one surprises us. Galileo found that the heavy ball hit the ground first, but only by a little bit. Except for a small difference caused by air resistance, both balls reached nearly the same speed.

But what surprises us is what Galileo says happened just after he released the two balls. He says the lighter ball always started out a little bit faster than the heavy ball. Then the heavy ball caught up. That sounds crazy.

So Thomas Settle and Donald Miklich reran Galileo’s tower experiment in front of a camera. An assistant held four-inch iron and wooden balls at arm’s length — as Galileo would have to have held them to clear the wide balustrade atop the Pisa tower.

It turns out that when you try to drop them both at once, your strained muscles fool you. You consistently let go of the lighter one, the one you’ve been gripping less intensely, first. That means Galileo accurately reported what he saw happening. And we’re left with no doubt that he actually did do the experiment.

Galileo went on to become the first real challenger of Aristotle. His tower experiment was no fable — no apple falling on Newton’s head. This was one of the first controlled scientific experiments. Like most of today’s experiments, it was imperfect. But this experiment changed Galileo, and it changed history.

Measurements in the Italian experiment

Galileo uncovered this fundamental relationship between distance and time without so much as a reliable unit of measure or an accurate clock.

Galileo perforce delineated his own arbitrary units along the length of his experimental apparatus. As long as these units matched one another, he reasoned, he could use them to discern mathematical relationships.

Lacking any kind of precision timekeeper, Galileo literally weighed the moments of his experiments: he allowed water to drip through a narrow pipe during the interval of interest; then he balanced the collected water’s weight against grains of sand.

Galileo’s other inventions and contributions

Few individuals have had as profound an impact on science as Italian physicist and astronomer Galileo Galilei, whose groundbreaking inventions and discoveries earned him the title “father of modern science.”

With contributions in math, physics, and astronomy, Galileo’s innovative, experiment-driven approach to science is not limited to the Italian experiment discussed above and made him a key figure of the Scientific Revolution of the 16th and 17th centuries.

During this time, he all but disproved the Aristotelian physics and cosmology that had previously dominated the sciences in Europe.

Through such pursuits, Galileo discovered and described phenomena that generations of philosophers had not even noticed.

For example, the shape of the path traced through space by a hurled or fired missile, Galileo showed, was not just “a line somehow curved,” as his predecessors had said, but always precisely a parabola.

And when lemons dropped from treetops or cannonballs from towers, each one picked up speed in the same characteristic pattern, tied to the elapsed time of its fall.

In light of these findings, in 1598, Galileo began selling a geometric and military compass of his own design, though the profits were minimal.

Consisting of two rulers attached at right angles with a third, curved ruler between them, Galileo’s compass — known as a sector — had multiple functions.

Soldiers in the military used it to measure the elevation of a cannon’s barrel, while merchants employed it to calculate currency exchange rates.

The telescope of the Italian experiment

While he did not invent the telescope, the enhancements Galileo made to original Dutch versions of the instrument enabled him to make new empirical discoveries.

While early telescopes magnified objects by three times, Galileo learned to grind lenses — an advancement that eventually created a telescope with a magnifying factor of 30x.

With his unprecedentedly powerful telescopes, Galileo was the first to observe the uneven, cratered surface of the moon; Jupiter’s four largest satellites dubbed the Galilean moons; dark spots on the surface of the sun, known as sunspots; and the phases of Venus.

The telescope also revealed that the universe contained many more stars not visible to the naked eye.

This experiment is a milestone in the history of Italian science.

In the 16th century, Polish astronomer Nicolaus Copernicus became the first scientist to promote a model of the solar system in which the Earth orbited its sun rather than the other way around.

Galileo’s observations discredited the Aristotelian theory of an Earth-centered solar system in favor of the Copernican heliocentric model.

The presence of moons in orbit around Jupiter suggested that the Earth was not the sole center of motion in the cosmos, as Aristotle had proposed.

Furthermore, the realization that the surface of the moon is rough disproved the Aristotelian view of a perfect, immutable celestial realm.

Galileo’s discoveries — including the theory of solar rotation, as suggested by shifts in sunspots — incurred the wrath of the Catholic Church, which espoused the Aristotelian system.

Upon finding him guilty of heresy in 1633, the Roman Inquisition forced Galileo to rescind his support of heliocentrism and sentenced him to house imprisonment — he would eventually die, still under arrest, in 1642.

Finally, a movie about Galileo with Italian audio and subtitles.

The language is a bit difficult for beginners, but its slow pace makes it a good material to practice listening.

Posterity agrees that Galileo’s great genius lay in his ability to observe the world at hand to understand the language of the universe.

Besides, there’s a huge collection of short stories and news with slow audio to practice listening. 100$ free! 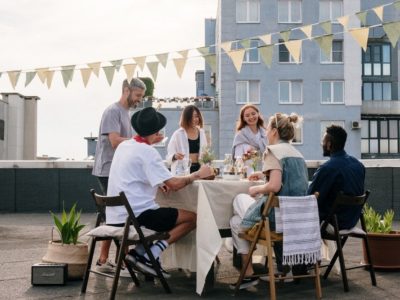 Can I move to Italy without speaking Italian?

Planning a visit to Italy You might be planning to visit Italy, and wondering if you need to speak Italian to be able to enjoy your time there… The short...
Read more