The Italian Language in History and Today

Beauty, history, culture. The Italian language has them all.

Find out more in this guide!

Italian belongs to the Romance branch of the Indo-European language family. Like other Romance languages, it developed from Vulgar Latin, a colloquial variant of Latin spoken by the Romans that they imposed on all the peoples under their rule.

As you can imagine, then, the Italian language shares many characteristics with other Romance languages such as Spanish, Catalan, Portuguese, French, Romanian and other minority languages (Occitan, Provençal, Galician, Ladin, and Friulan).

As we mentioned, Italian derives from Vulgar Latin, which was the language spoken among common people and less educated citizens of ancient Rome. This, of course, did not happen overnight, and not even in a few decades, but developed over many centuries through a long and gradual process.

Latin had been imposed and spread during Roman rule all over the Empire, but, after its fall in the V century, vernacular and local forms of the language gained more and more of an important role in society.

For several centuries, however, and especially during the Middle Ages, Latin would remain the dominant official language, used throughout European Universities and in all the official acts and procedures of the Church. In fact, many words used today in written and spoken Italian (like gloria, causa, poeta, memoria, medicina, simile) are taken directly from the Latin language of 2,000 years ago and Italian is considered the Romance language that most closely resembles Latin.

During this time, due to a long history of separation into many small states and colonization by France, Spain and Austria-Hungary, the Italian language did not really exist yet, but started its development in the form of many different regional dialects that maintained separate identities, while the official language of most Italian states remained either Latin or the language of the colonizing power.

So, how did the Italian language as we know it come to be?

Around the 14th century, one local dialect among all others started to stand out thanks to writers such as Dante, Petrarca and Boccaccio, whose works had immense literary significance. It was the Florentine dialect, of the region of Tuscany, which would become the basis for modern Italian.

Even if the Tuscan dialect became, over time, the national language, it remained an exclusive conduit for literary expression for various centuries, during which regional and local dialects continued to be spoken in a peninsula that remained fragmented in numerous city-states (often under foreign rule) until 1861, the year of the unification of Italy (l’Unità d’Italia).

When Italy was unified in 1861, the decision was taken to make Tuscan the official language of the country. This choice was made after a few centuries of disputes between linguists, and was down to a number of factors: Florence’s economic and cultural prestige played a part, particularly because of the works of the three great writers mentioned above. However, in those times most of the population was illiterate, a problem that persisted in rural regions up until the 1950s, when less than 20% of the Italian population spoke Italian fluently in their day to day to life.

Later on, thanks to the growing use of radio, television and newspapers, and to the increasing availability of education, the Italian language started spreading faster and faster until, in a few decades’ time, it became the main language spoken on the boot-shaped peninsula. 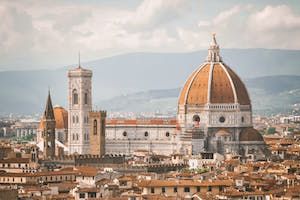 As we have just seen, dialects were used as the everyday language for centuries, and the Italian language as we know it did not really start being used by the majority of the population until the second half of the XX century. In this sense, compared to the rest of Europe, Italy presents a unique situation because of the widespread use of dialects. Dialects still remain widely used in some regions, and not only by older generations. In many regions, they are spoken at home and in informal social situations. Even if younger Italians prefer the use of standard Italian, they still can express themselves in their dialect and they understand it perfectly.

It is essential to note that dialects can change a lot, even within the same region, representing an incredible cultural richness. They form a continuum of intelligibility throughout Italy, with the geographically distant ones being mutually unintelligible.

In the past, people thought that standard Italian was the language used by the bourgeoisie, and had a prejudice against dialects, which were considered a lower form of expression used by farmers and the working class. Today, however, this prejudice is dying out. Recent statistics have revealed that in Veneto, which is one of the most economically developed regions, around half of the population speaks in dialect, both with their families and with friends, and regions are trying to revive their local languages with festivals and other initiatives.

Just as a curiosity, when it comes to regional dialects, the most widely spoken is Neapolitan (napoletano), with over five million speakers!

At present, Italian is spoken by around 60 million people in Italy, with a total worldwide of 67 million speakers in over 30 countries around the globe, and it is an official national language in Italy, Switzerland, Vatican City, San Marino, and the Sovereign Military Order of Malta – not to be confused with Malta the country, where it enjoyed official status for centuries (until 1934) but no longer does. It’s also an official language of the European Union. Moreover, it is recognized as a minority language in three other countries: Slovenia, Croatia and Brazil. Italian is also is widely spoken in Malta, Corsica, Albania, Luxemburg, Germany, and Belgium; in the Americas, it is spoken in the United States, Canada, Venezuela, Uruguay, Brazil, and Argentina. Sources differ slightly, but Italian is on the 20th place of the most spoken languages in the world.

Even if the Italian vocabulary is mainly derived from Latin, you will find numerous borrowings from Greek, French, English and German.

The Italian language is probably one of the easiest to pick up for English speakers. English and Italian share plenty of cognates, and there is a number of Italian words that we have already adopted, and that you probably use without realizing it. This, as well as the amazing travel opportunities in one of the most beautiful countries in the Mediterranean, is surely a reason to learn this language (a trip to Italy will be even more unforgettable if you’re able to speak with the locals)!
Here are some examples of Italian words that have already broken into English:

Interesting facts about Italian, English, and dialects in Italy

For more interesting facts about today’s use of the Italian language in Italy, together with foreign languages and dialects, check out this original report based on data from the Italian government.